I think I’m getting better at editing. Know why I say that? Because I’m recognizing my crap when I see it!

I thought I would breeze through this last edit (since it’s like my, what, thirtieth?), but that’s not the case. When I’m stuck fixing a scene, I realize that maybe it needs to go. So when I hit those spots, I stop and take a break, so I can attack it with a fresh head.

I’d love to be done, but not at the expense of my novel. I want it to be good, not just okay. And once I’m done with this round of edits, I plan on submitting it (chapter by chapter, or course) to a critique group I joined. I’d start submitting now, except I don’t have time to reciprocate and I want to have time to do that.

Writing is hard. Harder than I ever thought. But I don’t care. I’ve never loved anything more (people & animals, yes; things, no). Now, if I can only win the lottery, then I can quit my job and write all day. Yeah – that’s a dream I’d like to come true!
Posted by Stacy McKitrick at 11:14 PM No comments:

Email ThisBlogThis!Share to TwitterShare to FacebookShare to Pinterest
Labels: Writing

Thanks to Stephenie Meyer, I’m a huge fan of Muse. But finding them on the radio around here was impossible (at least it was last year). On one bored day at work (at my old job), I hunted around and found a radio station on line, out of Los Angeles, that played Muse. I was hooked. I also discovered Evanescence, The Killers, Coldplay, and Weezer.

This from a person who grew up loving Barry Manilow and Neil Diamond.

When I was 18 (and in the Army), I loved “Gonna Fly Now” from the movie “Rocky”. I mentioned the song to a co-worker, who was all of 27. She said she’d never heard it (I was shocked!) and went on to tell me that she used to love music, but as she got older, she didn’t have time for it. What? No time for music? If that was the case, I didn’t want to get older.

But as it turned out, I always had time for it. I may not know what group or song I’m listening to, but I know what I like. And I like the way music inspires my writing. It can certainly get me through a difficult scene. I thought it might be distracting, but put the right mood of music on, it’s anything but.

Music and writing. It’s nice to know two things I love go together so well.
Posted by Stacy McKitrick at 10:36 PM No comments:

Okay Snow - You can STOP 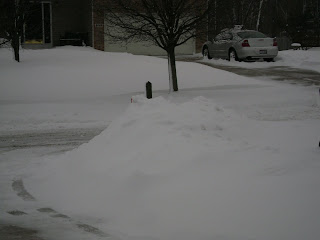 Another 5-6 inches fell since yesterday.  I'm so sick of shoveling.  The piles are getting too high.

This is my mailbox, from behind (it is accessible from the front).  You can barely make out the red flag and the wooden pole.  I have to shovel the road in front of the box if I want my mail delivered. 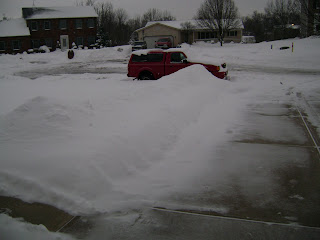 This is the other side of our driveway.  Yes, that's our truck at the end.  It would have had more snow on it, but we finally cleared it off on Saturday, since we needed to use it.  I guess I should be happy we are ONLY getting 5-6 inches at a time.  But it's enough, let me tell you!
Today is my Dad's birthday and I was a good daughter and called (but I was apparently a bad daughter because I didn't send a card!).  He just had to rub it in that it's 74 degrees in Santa Barbara.  No fair!
At least my editing is going well (well, it's progressing, anyway).  I got more feedback on another contest (of course they looked at an older version than what I have now, but a newer version from the first contest I entered), and again, I have fixed some of the problems they saw with it.  So, I'm still hopeful.  Now back to work on it!
Posted by Stacy McKitrick at 8:45 PM No comments: 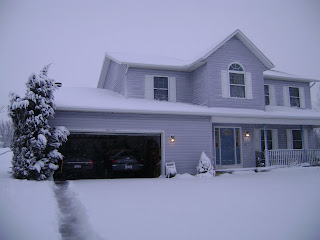 I thought I would post some pictures of what we experienced this past week.  Of the one of our house, you can see the path I shoveled to get to the end of the driveway.  That was on Tuesday, and it was still snowing. 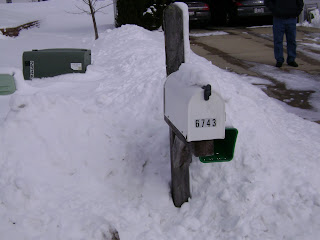 I wanted to show how much snow we've shoveled by taking a picture of our mail box and the pile of snow next to it, but everything is white, it's kind of hard to see. Plus, it was very bright out today (well, actually yesterday, since it's now after midnight) and I couldn't see the screen on the camera to see if it even turned out!
More snow is on the way. How much is anyone's guess!  I'm not looking forward to it.
Posted by Stacy McKitrick at 12:10 AM No comments:

I Think I Hate Snow

I've seen too much of the white stuff for the past week.  Granted, we didn't get near as much as others, but 5-6 inches at a time adds up.  And we're supposed to get more on Saturday.

This morning I actually got my car stuck backing out of our driveway.  Apparently they had plowed the street and I didn't realize it until I was in the stuff.  Did not start out the day in a very good mood after that!

Another thing I hate about the snow is that it keeps me from writing.  I spent several hours on Saturday shoveling when I would have rather put that time to use on my book.

So between editing my book and shoveling snow, it doesn't leave much time for my blog!
Posted by Stacy McKitrick at 6:07 PM 2 comments:

How Do You Know?

How do you know when you’re done with a scene? A chapter? The whole gosh darn novel?

I’ve been editing the THE UNCOMMON ONE (Book 1) for the umpteenth time. I finally got some great feedback from a contest (of which they received an older version). While a lot of the mistakes they noticed had already been corrected (pat on the back), there was a major flaw I didn’t catch: a lot of talking and not much movement/action. The best feedback was the judges thought the story was unique (yea!) and wished me luck on the revisions.

So as I go through my book, I noticed I had improved chapter by chapter (more showing, less telling). I hope it’s just the beginning that needs work, but I’m still going through it scene by scene.

My problem? Every time I re-read something I think I fixed, I always find something else. I don’t think I’ll ever be satisfied! Is that common?
Posted by Stacy McKitrick at 2:12 PM 3 comments: 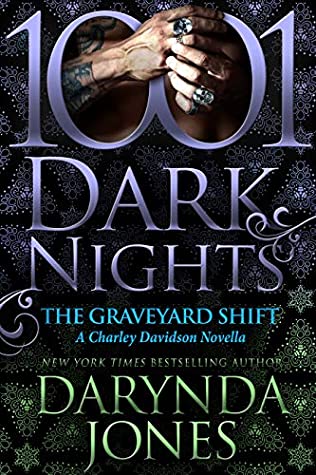