I’m home! Couldn’t believe how nice the weather was in (I believe it was hotter in than there), even with all those people attending Dragon*Con. I heard the attendance broke records – 70,000 people – and they were probably all there on Saturday. That day was CRAZY! I gave up going to the Arrow panel then (glad they met again on Sunday). I needed some space! Besides Saturday, I had a great time. Okay, I had fun on Saturday, too. But man, the Con just went by too fast.


I promise to copy the pictures from my camera to my laptop before Thursday night, so I can post some pictures. Not that I took a lot. I wish I could promise my husband will do the same (because he did take a lot), and maybe he will. If I bug him. Relentlessly. We’ll see.

Sep 2: “Gypsy” by Patricia A. Ramsey, #3 in the Sons of Sangue series, a paranormal romance at 422 pages. Blurb from book: Grayson “Gypsy” Gabor loves the ladies. As a matter of fact, the more the merrier. Life is good. That is until a mishap with a sexy-as-hell redhead leaves them mated. The eldest of vampires, Vlad Tepes, gives him a choice: keep her or give her up for all eternity to his one-time best friend, Anton. Tamera Cantrell sets her sights on the Vice President of the Sons of Sangue, Gypsy. But after a night gone wrong, she finds herself caught between one vampire who hates her and one who adores her. Now Tamera’s only got three short months to prove to the one who despises her that he can’t live without her. Add in one Mexican Cartel, a vindictive primordial vampire, and a rival MC out for blood, and Gypsy has his hands full with club business. When Tamera’s life becomes endangered, Gypsy must act quick or chance losing her forever.  Not my favorite of the series. I had trouble forgiving Tamera (which caused me to knock a star off), although I did enjoy seeing my hometown () mentioned and there was plenty of suspense to keep me riveted. This series has an overall story arc which doesn’t get resolved in this book, so there’s sure to be more to come. At least the couple’s story isn’t left hanging, so I'll definitely keep reading.

Sep 5: “Star Cruise: Marooned” by Veronica Scott, a sci-fi romance at 128 pages. Blurb from Goodreads: Meg Antille works long hours on the charter cruise ship Far Horizon so she can send credits home to her family. Working hard to earn a promotion to a better post (and better pay), Meg has no time for romance. Former Special Forces soldier Red Thomsill only took the berth on the Far Horizon in hopes of getting to know Meg better, but so far she’s kept him at a polite distance. A scheduled stopover on the idyllic beach of a nature preserve planet may be his last chance to impress the girl. But when one of the passengers is attacked by a wild animal it becomes clear that conditions on the lushly forested Dantaralon aren’t as advertised – the ranger station is deserted, the defensive perimeter is down…and then the Far Horizon’s shuttle abruptly leaves without any of them. Marooned on the dangerous outback world, romance is the least of their concerns, and yet Meg and Red cannot help being drawn to each other once they see how well they work together. But can they survive long enough to see their romance through? Or will the wild alien planet defeat them, ending their romance and their lives before anything can really begin? Kind of short, but enjoyable. Not too much techy stuff in it and lots of adventure. Seemed to end abruptly, though, and I would have liked the romance drawn out a little more.

Sep 8: “Drunk on You” by Teri Anne Stanley, a contemporary romance at 198 pages. Blurb from Goodreads: Undiluted desire, served straight up. Justin Morgan would happily drown the pain of his injured leg—and the guilt he brought back from —in bourbon. Except, there won’t be any booze if he doesn’t rescue his family’s century-old distillery from financial ruin. The problem? Allie McGrath—youngest daughter of the distillery’s co-owners, and the one woman he can’t have. Allie has been in love with Justin since…well, she's always been in love with him. Now he's home, broken up over the death of her brother, and he needs help. She can fix the distillery—she’s sure of it—but no one’s taking her or her sweet new idea seriously. Convincing Justin is her only hope. Allie is more tempting than Justin expected, threatening a promise he swore he’d never break. If he can’t keep their attraction under control, there’s a solid chance they’ll send the whole enterprise crumbling to the ground…if he doesn’t crash and burn first. A sexy and fun read. Got happy tears at the end. Awwww.

So… What did you do while I was gone?

What did we do while you were gone? We waited for you to return!

Seriously, for me it was a pretty quiet weekend. Worked Saturday but it was fun, outdoor work.

Glad you had a good time at the con!

Jeff - Awww... You waited for me? What a nice liar you are. :) Nothing wrong with quiet weekends. They're great for recharging. 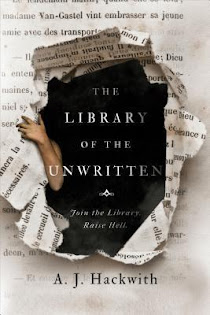