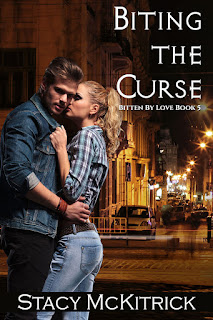 So… I haven’t finished reading The Institute (which is good, by the way), so I have no books to report today. Instead, I thought I would share the short story I wrote for Book and Main Bites. I was directed to write from the POV of one of my characters in journal form about the first encounter with their love interest. I chose Sam from Biting the Curse.

I also shared this story with my newsletter subscribers, so if you’ve seen this before, enjoy it again. If you haven’t, you’ll have to let me know what you think. I like it (yes, I’m biased, so what?) and hoped it would grab interested readers. I don’t think it did the job at Book and Main Bites (I didn’t notice sales increase in March), but it was fun to write. That’s all that matters, right?

I, Sam Kincaid, nearly outed the vampire race—again. Actually, it can still happen.

I had a close call tonight. I couldn’t control the woman I’d fed from. Couldn’t erase her memories, either. Luckily I still had a brain and was able to talk my way out of that mess. I hope. But man, when we touched I actually felt warmth from her. Warmth! And her scent of peaches and cream came alive. I thought I’d been transported home. Back when I could eat real food. Back before I was turned into a vampire.

I’m sad that I had to let her go, but a mortal who can’t be controlled is a dangerous mortal. But I couldn’t kill her, either, even though it’s practically the rule among vampires regarding anyone whose memories we can’t erase. But how could I kill someone who made me feel so … alive? Almost mortal?

I have a feeling it’s going to be a long time before I forget one Janie Robinson.

It’s been a week and I still can’t get Janie out of my head. Oh sure, I’ve been scouring the news outlets—especially the entertainment rags—to see if she claimed to have been bitten by a vampire. So far, nothing. So it looks like I’m in the clear. So why can’t I forget her?

It’s been over a month and I still haven’t washed the T-shirt I wore the night I met Janie. Her scent is nearly faded now, but still, can’t wash it. Won’t wear it, either. That sucker is stashed in a sealed baggie. I only open it when I need a whiff of her scent. Lately, I’ve needed lots of whiffs.

Why did I let her go?

It’s been a year and I still can’t get Janie out of my head. I even went back to that old gas station, hoping she’d stop by again. But nope. Just dumb luck I’d run into her the first time.

I wouldn’t mind having some more of that dumb luck.

Has it really been two years? I still have the T-shirt in the baggie. Her scent faded long ago, but for some reason washing it seems wrong. So does throwing it away. I should throw it away. I need to forget her.

This is the worst day of my life. I lost the T-shirt! 3+ years of saving it and it’s gone! I’ve looked everywhere. This is what happens when a vampire moves. They lose stuff. Hopefully Vegas will get my mind off Janie (I’m a bartender here now). Not having the T-shirt anymore should help, too.

Maybe my subconscious lost it on purpose.

I hate my subconscious.

It’s been almost four years since I met Janie. Nine months since I lost the shirt. Nine months of getting over my obsession. Then the Committee posted an announcement on their website.

I can’t believe my eyes. Perfect Mates are real. First time I heard that story, it sounded like a stupid myth and I never gave it another thought. But to find out the story is real? That Perfect Mates exist?

Is Janie a Perfect Mate? Vampires can’t control Perfect Mates. I couldn’t control Janie. Perfect Mates smell like home. Janie smelled like peaches and cream, a scent I always associated with my old home. And the kicker? When a vampire touches a Perfect Mate they feel warmth! I felt warmth with Janie.

And I let her go!

I need to find her. But how? I don’t dare ask another vampire to help. She’s mine! What am I gonna do?

Three vampires have found their Perfect Mate. Three! Would it have been four if I hadn’t let Janie go? John Pennington is one of the vampires. He lives in Dayton, Ohio, and owns a bar. I’m a bartender. Wonder if I can get a job, and some advice?

I need lots of advice. And I can trust him. He has his own Perfect Mate.

Perry contacted me about setting up a bachelor party for his friend, who is getting married in this crazy city on the 28th. Even invited me to the event. I was going to decline because I planned on going to Dayton then, until I found out which friend was getting married.

John said he’ll help me. That he’ll even keep this information from Perry. Because, let’s face it, Perry is determined to find his own Perfect Mate and no one could be more perfect than Janie Robinson.

Only thing, I had to promise not to interfere if she’s already married. John isn’t going to help break up a marriage.

Just the thought of her being married to someone else makes me on edge. She can’t have found someone else. All I think about is her. All I want is her. She has to feel the same way toward me.

But I agreed. I mean, I don’t want to ruin her life. I want her to be happy. I just hope she’s still single if, no, when I find her.

Because I will find her.

Read Sam and Janie’s story in Biting the Curse, Book 5 in the Bitten by Love series, which can be found at the following vendors:

FYI: There are no years listed in this short story because I write slow. Some of these events happened in A Vampire Wedding. While there are three years between that and Biting the Curse's release, only seven months had passed in that timeline.

Now that is what I would call an obsession!

Alex - Yeah, my vampires can get obsessed.