Reading Update and I Need Some Good Mojo

I had a lot of tests/procedures done to evaluate my leaky heart valve since I’ve been having some difficulties breathing when it came to my exercise. And the results were not that great: the regurgitation has moved into the severe category. Ugh. That means surgery.

I knew this day would eventually come. I was warned back in 2015. Heck, I would have had surgery back then if the repair could have been done easily. But the surgeon I saw up in Cleveland wasn’t sure he could repair it and since I wasn’t experiencing any symptoms at the time, I decided to wait and hope for better technology.

And better technology is here! The surgeon I saw in Cincinnati this time around has fixed thousands of leaky mitral valves via robotics (meaning they can repair the valve without breaking my chest wide open). This was GREAT news. Sure, I could still end up getting my chest cracked open, or the valve might need to be replaced, but he won’t know those things until he starts the surgery (but will be prepared for all scenarios). I’m good with that. My surgery is scheduled for April 27.

So if you have any good mojo to send my way to help keep this surgery to the least invasive way, I would surely appreciate it! 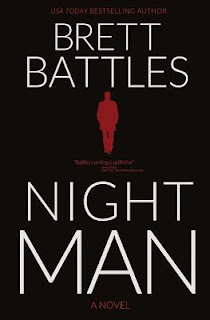 Dates read: April 4-7, 2021
Title: Night Man
Year of publication: 2019
Author: Brett Battles
Genre: Suspense
Series: The Night Man Chronicles #1
# of Pages: 306
Paper or plastic: Trade paperback
How obtained: Purchased new
Blurb from book: THIS ONE. Nate doesn’t want to listen. He’s between missions and just wants to relax, not to travel hundreds of miles and hunt for the driver of the car that hit someone he doesn’t even know.
But ignoring the call is not an option.
What Nate had hoped would be a simple mission, turns into something much more sinister, when he discovers a wide-reaching evil, festering in a small, Northern California town.
To confront it, he will need all the skills he’s learned working in the shadow world.

My thoughts: So… Nate is a character in the Jonathan Quinn series. But you don’t have to have read that series to enjoy this one. Just be prepared to get sucked into the story. Happens to me with every one of Brett Battle’s books. 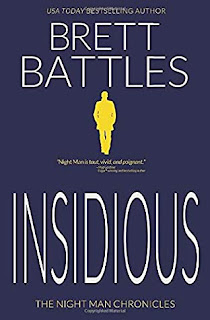 Dates read: April 8-13, 2021
Title: Insidious
Year of publication: 2020
Author: Brett Battles
Genre: Suspense
Series: The Night Man Chronicles #2
# of Pages: 328
Paper or plastic: Trade paperback
How obtained: Purchased new
Blurb from book: THAT WAY. It’s such a simple request that Nate doesn’t think twice about turning down the path Liz suggests. But when he finds the body, he realizes he should have known better. Liz has the habit of pointing him toward those who need his help, even if they are no longer living.
His deceased girlfriend isn’t the only one pushing him to solve the dead woman’s murder. After his best friend Jar discovers the woman’s true identity, she insists they need to investigate. Nate is not as sure. The police are on the case, after all, and if he and Jar intervene, they would only get in the way.
But when more dead bodies begin stacking up, it becomes clear Nate and Jar are the only ones who can unravel the devious plot behind the young woman’s murder, and the trail of death meant to cover it up.

My thoughts: Again, I became addicted to this book as soon as I started it. I’m enjoying reading about Nate’s “hobby” from his other job (which is shown in the Jonathan Quinn series). I also like how he and Jar help each other.

I’m still walking as often as I can. Still trying to keep my heart strong. Plus, I like walking. I got up to 4 miles one day while I was exploring the new construction near us (our “neighborhood” is still growing and I like seeing all the new homes). My stride might not be as fast as it used to, but at least my feet hurt less after I walk, so I’ll take that gain. Hopefully one day soon I’ll be able to walk faster (and do the step aerobics) without breathing so hard! That’s my goal.

Will definitely be praying for you. At least your doctor is very familiar with the procedure and it's not very invasive. Just keep walking until then.

Alex - I'll walk as long as the weather cooperates (and I don't have any appointments anywhere)! :D

Sending you all the good mojo I can. I'm very happy to hear technology has improved.

Praying for you, sweetie. Let us know how it went as soon as you're able.

Hugs and good mojo coming your way! Glad to hear the technology is better than a few years ago. And good job with the walking - keep it up!