Wednesday Reads and Another Sucky Game

I’m not getting a good feeling with the Penguins right now. I thought for sure they’d win at home, but nope. They’ve been known to come around before, sure hope they don’t wait too long to do it this time.


Here’s what I finished reading this week: 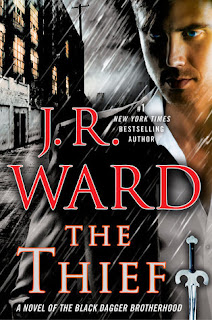 Dates read: April 23-25
Title: The Thief
Year of publication: 2018
Author: J.R. Ward
Genre: Paranormal romance
Series: Black Dagger Brotherhood #16
# of Pages: 454
Paper or plastic: Hardback
How obtained: Borrowed from daughter
Blurb from Book: Sola Morte, former cat burglar and safecracker, has given up her old life on the wrong side of the law. On the run from a drug lord’s family, she is lying low far from , keeping her nose clean and her beloved grandmother safe. Her heart, though, is back up north, with the only man who has ever gotten through her defenses: Assail, son of Assail, who never meant to fall in love—and certainly not with a human woman. But they have no future, and not just because she doesn’t know he is a vampire, but because he is not about to stop dealing arms to the Black Dagger Brotherhood. Fate, however, has other plans for them. When Assail falls into a coma and lingers on the verge of death, his cousins seek out Sola and beg her to give him a reason to live. The last thing she wants is a return to her past, but how can she leave him to die?
As a lethal new enemy of the vampires shows its face, and the Brotherhood needs Assail back on his feet, Sola finds herself not only a target, but a mission-critical force in a war she doesn’t understand. And when Assail’s truth comes out, will she run from the horror…or follow her heart into the arms of the male who loves her more than life itself?


My thoughts: When a book is good, I definitely have no problem reading it fast. And to think I read this AFTER I got my writing for the day finished. I do so love this series. I just wish she could write them faster (but I won’t fault her for that—I know too well how hard books are to write, especially long ones). While the book description is centered on Sola and Assail, it also returns to Jane and Vishous. Again. I hope this is the end of their problems. I really do. I want them to stay happy this time.


You know what I love the most about reading? Getting ideas. As I read The Thief, I realized I could introduce a character in my current WIP who will be in a future book of my vampire series. Now I just have to figure out how to make it pertinent. Haha!


So… Has summer reached your neck of the woods? I swear, it feels like we went straight from winter to summer (it was 80 yesterday). I’m not ready to turn on the a/c yet! But I should be able to go walking this morning. That’ll be nice.

No warm feelings here, either.
We hit the eighties this week, but it's still not humid yet. Spring has really taken its time this year.

Alex - It's not humid here yet, either. I guess I should consider us lucky.

Donna - I can't imagine a book with an uninteresting character. Ugh.