My surgery has been cancelled indefinitely. Some people might see this as good news. I don’t, necessarily.


It’s strange that I feel a little pissed I won’t be having the surgery. I was under the impression that when they scheduled it, the doctor had looked at all the tests I had gone through back in May. And that the only reason I went through some of the same tests again was to see any differences. But no, that wasn’t the case at all.


It’s like they just looked at the tests I had done last week. And now I’m told that the surgery isn’t a slam dunk. That my mitral valve prolapse isn’t like others. Apparently I have a funky flap (doctor’s words), where the bottom flap is leaking (instead of the top flap) and that the surgery wouldn’t be easy. He didn’t even think the valve could be repaired (I’ve got some calcium thing going on in there that really baffled him), which means it would need to be replaced. A replacement valve would not do me any good now. In fact, it could make things worse (a mechanical replacement valve would put me on blood thinners for the rest of my life). So… since I’m not feeling any symptoms yet, it would be best to wait until I do.


How long will that take? Anywhere from 1-10 years.


FYI – A replacement tissue valve only lasts about 10 years. Another reason to wait.


At least I now know my condition is NOT life threatening. That did concern me. I may get weaker and have trouble catching my breath (the symptoms I’m to expect), but I’m not at risk for a heart attack and I’m not a “ticking time bomb.”


I feel kind of stupid telling everyone about my upcoming surgery now. Makes me think I should just keep quiet about these things. But if I can’t talk about what’s going on in my life, then I might as well not blog. Because I can’t see me blogging just trying to sell my books. No one would stick around for that. I wouldn’t.


Now to change the subject, here are some pictures I took while up in . These were taken in Westlake, Ohio, along Lake Erie. I loved seeing some fall colors. 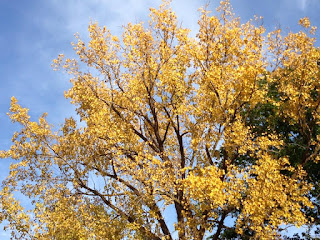 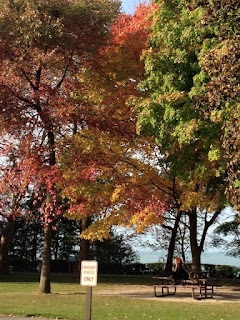 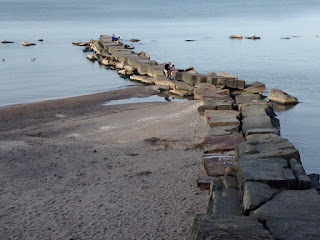 
Have a great Monday. J

Mac - Thanks! I'm always surprised at how nice some of my pictures turn out from my iPhone. :)

Lovely pictures and I'm sorry that things got mucked up. But I'm glad you told us about it because that's what blogging is for some of us (others it's just promote, promote and yawn, promote). But you blog has personality and flair. Keep it up and Happy Halloween Week !!!!

Any time you can avoid the knife, it's good news. Who knows? By the time you need the surgery they may come up with better ways for treating the problem.

And don't feel bad about sharing. That's what blogs are all about.

Ivy - My blog has a personality and flair? Who knew? Haha!

Maria - I don't have a lot of people around me anymore to share (the one thing I miss about working for someone else -- coworkers!). It's nice to be able to unload sometimes.

It's a bummer that you had to go through all of this scare in the first place, but the important part is "not life-threatening." And nothing wrong with sharing - that's what your friends are here for! At least you got in some nice cruising and scenery. :)

Well, at least you avoided an unnecessary surgery for now. I'm glad its not life threatening. Some things you can just live with for a while.

Jennette - Would have done the cruising anyway. Cleveland? Not so much. Haha! :)

Donna - I've been living with this heart murmur for fifty years or so, I guess a few more won't matter, huh?

Well. At least you got what looks like a nice weekend. I'm sorry to hear that your surgery won't be going through. Sucks to get all set for something (even something you kind of don't really want to do) and then have it not happen.

Jeff - I guess I'm the kind of person who just wants to get the inevitable bad stuff over with quickly. Hopefully, when the day comes (because I'm sure it will), it won't be that bad.

You have BUNCHES of personality and flair. And, you're flippin' funny.