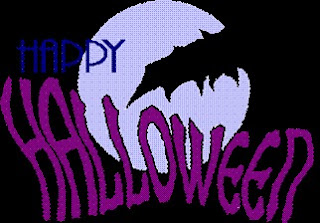 Got any plans for the holiday? Do you like to dress up? Party? Go out trick-or-treating with the kiddos? I don’t celebrate it all that much. If I’m home (which a lot of the time we’re not, for one reason or another), I’ll hand out candy (or rice krispie treats—which is what I bought this year), but I don’t bother to dress up. We don’t get that many “beggars” around here anyway (I’ll be surprised if we get 20).

Does your neighborhood/city call Halloween “Beggars’ Night”? They call it that around here. Apparently it’s more prominent in , but I don’t know when it happened (I’ve only lived here since 1991). I always went trick-or-treating or took the kids trick-or-treating on Halloween. Around here, you’re lucky to do that on Halloween. Guess that’s why they call it Beggars’ Night. Or maybe they call it that everywhere now. I can’t tell.


I think I finished. The novella, that is. I sure hope I finished, anyway. I won’t celebrate until I’ve read it over again today. I’m sure I forgot something. Haha!


It came in just under 24K words, though. Not too shabby.


Hey, would you believe I cooked last night??? Yeah, I shocked myself. I am trying to start cooking a few nights each week. Not only to save money, but hopefully to save calories. We'll see how it goes.

Tonight is the last regular season high school football game. is playing their rivals, , for the GWOC (Greater Western Ohio Conference) Central championship. At home (yay!). Win or lose, is guaranteed to play in the playoffs. needs the win to make it (I think). I hope crushes them. I’m greedy like that! J


Have a great weekend and don’t eat too much candy!

We've always called it Halloween. I grew up on Long Island. I don't think I've ever thought of Halloween as a holiday, since nothing was closed for it. We've lived in our home for 12 years now and have never had a single trick-or-treater--having no sidewalks and living just outside the hamlet kind of keep us out of it, which isn't a bad thing. We used to take the kids up into a nearby town where everybody went. It was an unbelievable scene.

Congrats on finishing your novella!

No, we don't call it Begger's night, what a horrible name.

You cooked? Cool. what did you make and how was it? Did you have fun? What do you guys normally do for meals?

Nope. Never called it Beggar's Night. Must be an Ohio thing that didn't travel north. Halloween, Hallowe'en, All Hallows Eve. Whatever way you call it, we don't do anything since we moved out to the sticks. No kids here, no chance of people bringing their kids here. I bought copious amounts of candy, but that's for us.

Yay for finishing your novella! And yay for cooking dinner! Fingers crossed for your team!

Too much candy? Is there such a thing? ;o)

We live out in the sticks so we don't get any trick or treaters.

But when I lived in a suburban area, we got loads. The little kids were the cutest. We'd dress old Tank and he'd carry the candy basket to the door. It used to scare the parents to see such a giant dog, but the kids loved him.

We get maybe a couple dozen trick or treaters - and yes to Beggar's Night. I'm not too into Halloween - mainly lost interest when costume making started becoming a lot of work.

Congrats on finishing the novella! Looking forward to reading.

And I'm cooking too! Cutting and prep tonight, and cooking all day tomorrow for all month! Your reasons are the same ones I started once a month cooking.

Jeff - And trick-or-treating always happened on Halloween, except one year, back when I was a young teenager (still hoping to grab some candy), when it fell on a Sunday. Goleta/Santa Barbara decided to have Halloween on Saturday. Yeah, that didn't work out so well. It ended up lasting all weekend. Don't know what they do when it falls on a Sunday now.

Ivy - I made spaghetti. Was it fun? No. I don't have fun cooking. Never had, never will. It's work. But I did enjoy the leftovers for lunch today. As for what we normally do: We eat out. I much prefer being waited on. :)

Beth - Well...there's too much candy if you're trying to watch your calorie count. I remember buying way too much one year, and this was when I was going to Weight Watchers. They said it wasn't a sin to dump candy. They were right. I really felt better after dumping the extra, too. Hubby wasn't too happy, but then he was in Korea at the time, so it wasn't like he was going to eat it!

Maria - At our last house we got tons of kids. Lived on a street that connected other streets. We used to put the stereo speakers in the window and play spooky music. It was fun! Now we live on a culdesac, so only the kids in the neighborhood visit (and there's not that many). Plus, our kids are grown, so it's not so much fun anymore.

Jennette - Don't know if I could cook ahead like that. Cooking one night was bad enough. Haha! I'm just going to take it nice and slow. Maybe I'll start liking it then. I doubt it, though.

I can't imagine a world where cooking is not fun :-)

Ivy - My friend (in Columbus) probably feels the same way.