Wednesday Reads and a Busy Week

Home for a few hours yesterday, only to leave bright and early (or would that be dark and early?) this morning for . At least I’m getting some reading done. I’m now six books ahead of schedule with only 12 left to reach my goal. I have a feeling I’ll meet it this year, no problem!


Here’s what I read this week:

Oct 14: “About a Vampire” by Lynsay Sands, #22 in the Argeneau Vampire series, a paranormal romance at 357 pages. Blurb from book: With immortal good looks and scorching charisma, Justin Bricker has yet to meet a woman he can’t win over. His potential life mate should be no different. But instead of falling into his bed, Holly Bosley runs away and ends up mortally wounded. To save her, he has to turn her. And then Bricker learns the shocking truth: Holly’s already married. Holly wakes up with a bump on her head, a craving for blood, and a sexy stranger who insists they belong together. She needs Bricker’s help to control her new abilities, even as she tries to resist his relentless seduction. Choosing between the world she knows and the eternity he offers is impossible. But Justin is fighting for his life mate—maybe even his life—and he’ll break every rule to do it… When I saw Justin was finally getting his own book, I was happy. He’s been in so many of the other books, usually the comic relief, and one of my favorite characters. But poor Justin. Even I wouldn’t have dreamed how cruel he’d be treated. He might have harassed a few dozen people, but he never sabotaged their love life. And really, I would have thought he’d realize what was happening well before he did. Still, it was a good romance and I enjoyed his story very much. This is one of my most favorite series. Always a good time reading these books.

Oct 16: “Kiss Chase” by Danica Avet, #3 in the Crushes to Cravings Tale, a contemporary erotic romance at 57 pages. Blurb from Goodreads: Falling for Hyde Parker was easy to do—Ava Boudreaux managed that feat before the second grade—but making him see her as more than a friend seems next to impossible. Desperate to start a new life somewhere Hyde-free, Ava is on the verge of accepting a job in a when the opportunity of a lifetime falls into her lap. It’ll mean staying in Grand Terre and using every ounce of willpower she has to keep from making a fool of herself over Hyde. Hard enough to do when they live in the same town, how’s she going to manage when they work together? Chasing and kissing Ava was a lot easier when they were in grade school. Back then all he had to do was run and tackle. Now that’s considered stalking and assault, leaving Hyde needing more subtle means of showing her how much he loves her. Being her protector, watching from afar and hoping that one day their relationship statuses would match up hasn’t worked well so far. Now Hyde knows it’s time to step up his game before he loses Ava for good. It’ll take some maneuvering, a little manipulation and lots of scorching hot kisses to bring this extended game of Kiss Chase to an end. I really enjoyed the story and the sex scenes were especially steamy, but I didn’t like how it ended on a cliffhanger. Then again I despise cliffhangers! I didn’t read the first two in this series and maybe it would have helped understand why there was a cliffhanger. I didn’t realize the title was the name of a kid’s game. I’ve never heard of it before (although, back when I was 9 or 10 I did chase some boys around and kiss them. Hmmm…).

Oct 19: “Myth and Magic” by Mae Clair, a romantic suspense at 252 pages. Blurb from Goodreads: Veronica Kent fell in love with Caith Breckwood when they were children. As a teenager, she was certain he was the man she was destined to marry. But a traumatic event from Caith's past led him to fear a future together. He left Veronica, hoping to save her from a terrible fate. Twelve years later, Caith, now a P.I., is hired to investigate bizarre incidents at the secluded retreat Veronica manages. Returning to his hometown, Caith is forced to face his nightmares—and his feelings for the woman he’s always loved. After the callous way Caith broke her heart, Veronica isn’t thrilled to see him again. But strange occurrences have taken a dangerous toll on business at Stone Willow Lodge. Forced to work together, Veronica discovers it isn’t ghostly apparitions that frighten her, but her passion for a man she has never forgotten. Or forgiven. Can two people with a tarnished past unearth a magical future? Something made me think this was a ghost story, but it’s not and that ended up being okay because it turned out to be a romantic suspense. I love those, too! Got caught up in the story right away and had a hard time putting it down. But reading this right after Kiss Chase kind of messed up my mind. They both start with a couple who knew each other as kids, so of course, I kept getting them mixed up. Ooops. 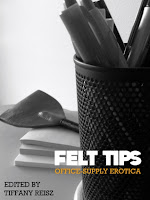 Oct 19: “Felt Tips: Office Supply Erotica” edited by Tiffany Reisz, a collection of erotic short stories at 306 pages. Blurb from Goodreads: The World’s Greatest Charity Anthology of Office-Supply-Related Erotica! This might have been a charity book, but I got it free when I attended RT2014. I’ve been reading this book for awhile (since August). Usually whenever I just wanted to read something quick. It’s good for that. You’ll find almost any kind of erotica in this collection—m/f, m/m, f/f, f/m/f—and there are LOTS of stories. After awhile I skipped through the f/f (they just don’t interest me). There were some good ones in this collection but most of them were just okay.


I expect I’ll be getting more reading in this week. At least I’ve been warned to bring a book during one of my procedures. Fun! Not.


So… how’s your reading coming along?

"Office Supply Erotica"??? Well, why not, I guess.

Being sick the last couple of days allowed me to speed through Jay McInerney's "The Good Life". I found it a bit uneven. Also finished up Nelson DeMille's "The Quest," which was a bit disappointing overall. Next up: Franzen's new one.

Good luck with everything coming up.

Jeff - You'd be surprised (or maybe not) what you could do with office supplies! :) I hope your next book is good. Sounds like you could use a good read!

Six books ahead, wowzers. I'm catching up on your blog. Glad everything went well.