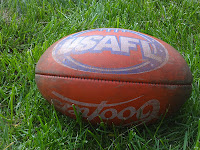 Here’s a picture of a footy ball the men used (the woman's ball was yellow for some strange reason). Don’t know if it’s really called a footy ball, but it’s the ball they use to play Australian Rules Football, or Footy.


My daughter played Saturday against a team from . The Columbus Jillaroos only had four players, but (don’t know their name-my bad) had eight, so they rotated two players from to play on the Jillaroos each quarter. They also made the field quite a bit smaller. Unfortunately, it didn’t help. They lost 71-34 (yeah, these are high scoring games as well as fast-paced).


We stayed to watch the Jackaroos play, since it was soooo nice outside (the sunburn on my neck and face are evidence to that). They utilized quite a bit more players (something like 18 each) and the pace is almost like a hockey game - they’re all over the place and there isn’t much stoppage of play (no offsides or stuff like that!).


As you can see, they don’t wear any protective gear. And yes, they can tackle (it’s a pretty rough sport).


We left after the third quarter (ONLY because our friend was fixing us dinner and it was already 5pm) and the Jackaroos were dominating at 48-7. I’m assuming they won. 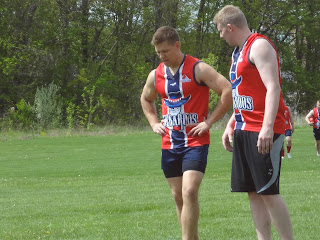 Out of the whole team, one player caught this romance writer’s eye. He warmed up WITHOUT his shirt (yeah, that’s one way to do it, unfortunately he was too far away for my camera, at least for me to be discreet--I know, I should have tried harder) and I swear, there wasn’t an ounce of flab on him. He didn’t look too shabby in uniform, either (that’s him on the left). As I watched the game, I noticed he never came out for a sub. He was a very good player, but then I heard him speak (yep, an Aussie), so I’m guessing he grew up playing the sport. Who knew there were so many of them in the area? Not me!


My daughter is passionate about this sport. At the end of this month she’ll be in trying out for the team to play in . One of the guys said wouldn’t even have a women’s team if it weren’t for her. I know she’s tried to get more women interested, but just hasn’t had any luck. She’s not giving up, though.


On Friday I attended the book signing of the anthology the Western Ohio Writers Association (WOWA) put together. There was a cake decorated with the cover (I did my part when they begged people to please eat the cake - yum) and 10 of the 11 authors were there to sign (I managed to buy a book that had the eleventh author’s--Liz Coley’s--signature, so I got EVERYONE). 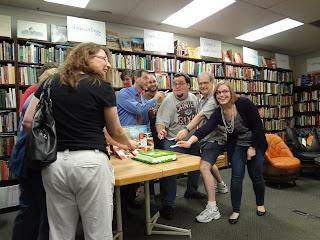 Here's one showing the whole group attempting to cut the cake (our group can be quite the kidders, huh?). 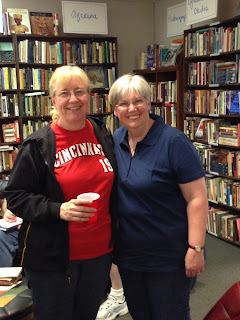 And here’s one of me and LD Masterson.
It was an interesting night, but I had a date back home with my television and the second game of the Penguins (which my daughter was there to see). Unfortunately, they lost game two, but at least they won game three on Sunday. Next game is on Tuesday. They better get their act together or they’ll be going home soon, and I certainly don’t want that!! Go Pens!!!


So, did you get sunburned this weekend?

That's cool to have a cake decorated like the book cover!

I'm glad you did your part. :) When there's cake involved, I always volunteer.

Maria - I can ALWAYS be counted on to eat cake. Don't have to ask me twice! And it was cool how they "painted" the cover on the way it was. I'll have to ask them where they had it done so WHEN I have my own book event, I can have one made!

Hey Stacy,
Cool post! That guy is hot and with a accent. Yum.
I'm glad you had fun at the signing. It's cool you guys had a cake with the cover on it.
I didn't get sunburn this weekend. I was at a funeral and wake. No one close to me but I went to support a friend.

Hi Bonnie! Yeah, that Aussie was nice to look at, I mean, listen to. :)

Hey, who's that old lady with you in that last picture?

Glad you could be there Friday night, Stacy. Next time you'll be signing.

I was busy running my daughter and her friends around in prep for prom all day Sat. so no sunburn. Footy looks interesting, esp. the guys! :)

LD - Kind of hard to sign a digital book, isn't it? I'll have to see how others do it!

Jennette - Yeah watching the guys was kind of fun. And if the women had a full team on both sides, they can be pretty interesting to watch, too! I wish there were more games played in the area, but teams are hard to come across! Certainly not local.

your weekend sounds awesome! Our was rainy, but rain was better than snow and today it's sunny so maybe we'll finally have sunburn weather too!

Hey - this was a great post. Congrats to your daughter for making such a contribution to the sport.

Also, very cool about the signing. Neat post, thanks for sharing.

Thanks, Ivy! Enjoy your day off!!