Wednesday Reads and Other Stuff

I went and saw the latest Star Trek feature last night ($5 movie night - still love it!). Had lots of chuckles while watching and came away happy. I liked this movie (oh heck, I like them all). Bones is still my favorite character (whether played by Karl Urban - yum or DeForest Kelley). Oh, but you didn’t come here to see what movie I watched, did you? Here are the books I read last week: 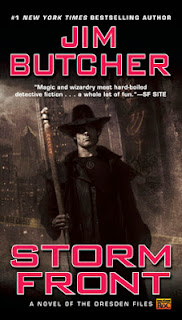 May 16: “Storm Front” by Jim Butcher. This is the first book of the Dresden Files, an urban fantasy. Blurb: Harry Dresden is the best at what he does. Well, technically, he’s the only at what he does. So when the P.D. has a case that transcends mortal creativity or capability, they come to him for answers. For the “everyday” world is actually full of strange and magical things--and most of them don’t play well with humans. That’s where Harry comes in. Takes a wizard to catch a--well, whatever. There’s just one problem. Business, to put it mildly, stinks. So when the police bring him in to consult on a grisly double murder committed with black magic, Harry’s seeing dollar signs. But where there’s black magic, there’s a black mage behind it. And now that mage knows Harry’s name. And that’s when things start to get…interesting. Magic. It can get a guy killed. I’ve had enough people recommend this series to me, and I’ve resisted mainly because I was afraid I would want to read them all. Well, maybe not all, but I’ll certainly be reading the next. Dang it! I gave this book 4 stars on Goodreads. 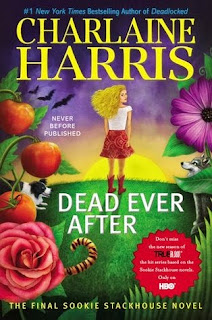 May 21: “Dead Ever After” by Charlaine Harris. This is the LAST book of the Sookie Stackouse series, an urban fantasy. Blurb: After the terrible events of the past weeks, both Sookie and Sam are finding it hard to concentrate on Merlotte’s--and the bar is suffering for it. But Sookie finds it easy to turn down the request of former barmaid Arlene when she wants her job back. After all, Arlene tried to have Sookie killed. Sookie’s relationship with Eric Northman is in limbo. He and his vampires are keeping their distance…and a cold silence. And when Sookie learns the reason why, she is devastated. Then Arlene is found murdered, and Sookie is arrested for the crime. But the evidence against her is weak, and Sookie makes bail. Helped by her assortment of friends, living and undead, she must discover the truth about Arlene’s death to clear herself of suspicion. All she knows is that two mysterious men were somehow involved. As to whom they might be--Sookie will soon learn that she has more than one enemy waiting to get vengeance for the past. Nothing is ever clear-cut in Bon Temps. What passes for truth is only a convenient lie. What passes for justice is more spilled blood. And what passes for love is never enough… I’ve heard a lot of grumblings about this book because it didn’t end the way a lot of readers envisioned it, but I had no problems with the ending. While there seemed to be more filler than needed in the story itself, I enjoyed this last book and especially how it ended. It fit. I gave it 4 stars on Goodreads.


Weather has been real nice. I even got to eat dinner outside last night (it was too cold in inside the building!). I suspect rain is on the way, because that’s just how it is. As long as the mornings stay dry, I’m good. Got my walking in yesterday and shaved another minute off. Don’t know how long I can keep that up without running, but I’ll certainly try.


So, have you seen “Star Trek Into Darkness”? What did you think?

One thing I can tell you about the Harry Dresden books is that they just get better from here (until like #12 which ticked me off, but you've got a ways to go before you get there.)

Yay for better weather, but yeah, the rain we got here is probably headed your way. Sorry.

I haven't seen the new Star Trek and probably won't until it hits cable - if then. I still have a tough time with all the old characters being played by totally new people. Leonard Nimoy will always be Spock to me - anyone else being Spock is just weird.

B.E. - I'll keep reading them as long as the library has them (I'm on a list waiting for the next book). It's crazy how the e-book and paperback are both $9.99! I ain't paying that.

I saw Star Trek and absolutely loved it. It was just a lot of fun.

I just finished the 14th Dresden book yesterday. My library has them all and that is my preferred way to read books. :)

Jen B - I usually like to keep the books I read, too, but sometimes it's just not feasible. Especially when the paperbacks are what I consider expensive!

Haven't seen it. I'm more of a original Star Trek fan, don't much care for all the ones after that.

But who knows, maybe someday I'll catch it. Not sure.