Actually, I should say, Sunday, Sunday, Sunday. Because that’s the day I usually WRITE my Monday post. But I wanted to write about the Penguins winning (they didn’t - grumble), plus I just didn’t want to write during the game (it was a bit intense). Next thing I know, they lose in double-overtime (double-grumble) and it’s after midnight. I was in NO mood to write!


Although I did get some writing done on Sunday (revising and first-drafting). Almost unheard of lately (since I’m home during the week). But when I realized I was missing a scene from my current revision project (this was on Friday - talk about grumbling!), I had to fiddle with it each day (as well as bore my poor husband talking about it) to figure out what was needed and yesterday it finally came to me. I was soooo glad to get that written, because I’m soooo close to the end of this book. I’m sure I’ll discover more roadblocks before I actually reach the end, though (because the end needs the most work).


I was able to go walking this morning. Even cut my time down from 85 minutes to 69 (high-fives anyone?). But hey, what’s with this weather? It was downright sticky out (this was at 6:30 AM, mind you). In fact, I had to actually turn ON the air conditioning yesterday and dust the fans so I could turn them on, too. It’s like we went from cold and wet to hot and humid in less than a week. At least I didn’t need a jacket walking! 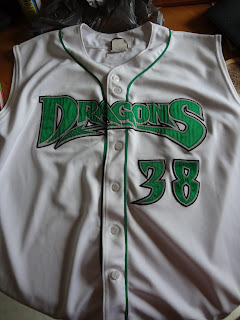 As promised, I took some pictures of the jersey I won on Thursday at the Dayton Dragons game. 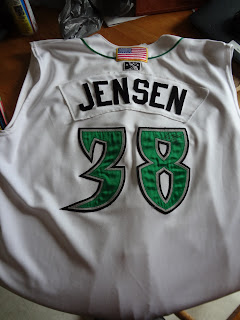 My daughter likes the name (she’s a fan of Jensen Ackles - even though this jersey had belonged to Dan Jensen). 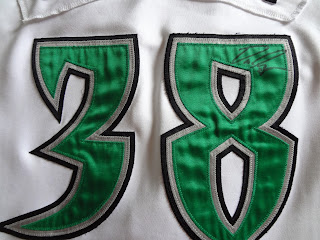 Oh, and you can see Dan’s signature at the top of the #8. Pretty cool.


Well, it’s off to breakfast for me, a quick shower, then back to the computer to check out everyone else’s blog before I get started back on my projects.


So, did you get anything accomplished this weekend? Are you watching the Stanley Cup Playoffs?

Posted by Stacy McKitrick at 8:20 AM

A high five from me, for sure. Glad you're feeling better.

Worked all weekend, did garden work and right now, we're both home waiting for the hot water heater dude.

Tim took the morning off, I was scheduled off, just worked out.

Did you get over your cold?

Ivy - Yep, feeling lots better. Thanks for the high-five and I hope you get your hot water back today!

Maria - After a week of being miserable, the cold is nearly history. The only thing lingering is my cough (which ALWAYS happens after a cold - so I try to ignore it - ha ha!). It felt good to get outside and exercise.

He is here now, and me and the pups are in the office, whilst the guys go back and forth - and all that stuff.

Dh & I went to Blessing of the Bikes yesterday and got our Harleys blessed for a safe riding season. Glad you're feeling better! That jersey is so cool!

Jennette - It was a nice day for bike riding, wasn't it? My hubby was able to put the top down on the car - yay!!

I'm loving having the top down on the car but you're right, it's really sticky out there.

LD - I may wait until the sun sets before I venture out again. Besides, there are these huge carpenter (bumble-like) bees hanging around my mailbox, like they do every year and I try to avoid them. It's the only thing I dislike about this time of year (well, that and the June bugs that come out at night - yuk). Gee, can you tell I hate bugs??

I got some bloggy type stuff accomplished this weekend :) I'm trying to get some revisions done myself.

I know I followed you a long time ago, but somehow I fell off your followers. I'm following again :)

Donna - Hope you're having better luck with your revisions than I am! I keep hitting road blocks. Ugh!

Thanks for coming back! :)

Big Bruins fan here; saw game 1, exulted in the B's overtime domination of the Rangers. Good news, bad news for me is that I only saw the first period of game 2 (bad news) because I had to go to my writer's group (good news!).

Hi, Stacy. No, I don't really watch anything these days. I barely follow my CUBS on my iPhone. Who would want to anyway? Right? ;)
I have been catching the highlights on SportsCenter, however.
Here's that high five you requested. *smack*
Have a good week.

Nice jersey! And congrats on being so near the end of the manuscript. That's a great feeling. We'll have a brief moment of silence for the Penguins.

Hi Jimmy! Thanks for the high-five!

Sandra - I better be making a lot of racket for the Penguins tomorrow. I want them to WIN!!!